The Code Club Moonhack is an annual event which aims to drive interest in coding for children aged between 8-18 years.

Moonhack was launched in 2016 by Code Club Australia and has since grown from strength to strength. In 2016 the event set a record with 10,207 kids coding on a single day. In 2017 the event grew to become a global phenomenon and saw over 28,000 children participate from a host of nations.

On July 20th 2018 and the 49th anniversary of the Apollo 11 Moon landing, 35,865 children around the world took a giant leap for humanity and the future of STEM. We smashed our previous record for Most Kids Coding in One Day by 25% and had Moonhackers participating from 58 countries (more than ever before!) and six continents. 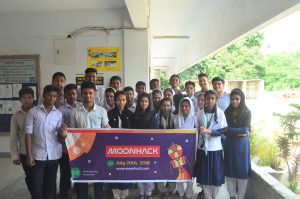 Moonhack is for all children. From first time coders to coding wizz-kids, we have a Moonhack project to progress them on their coding journey.

You don’t have to be a part of a Code Club, CoderDojo or other group to participate. Some kids will gather at home, others will gather at schools or libraries or even participating community partners to run Moonhackathons together.

Moonhack is designed for anyone who is curious to give coding a try. We also want to inspire those familiar with coding to create and share their best work as part of the world record!

Right now, all around the world, technology is transforming industry and our lives at a pace faster than ever before! Through Moonhack, we hope that kids will find pathways to many resources around the world that can open up a world of digital technologies education.

On 15 August 2017, Code Clubs around the globe set a world record for the most kids coding in a day! From Madrid to Manila and from Sydney to Seoul, kids in Code Clubs, homes, and community centres around the world used code in order to ‘hack the moon’.

The children had 24 hours to try coding a specially made Moonhack project using Python, Scratch or Scratch Jr. Creative Moonhackers even made their own custom projects, and we saw amazing submissions on a range of themes, from moon football to heroic dogs saving our natural satellite from alien invaders!

In the end, 28575 kids from 56 countries and from 600 Code Clubs took part in Moonhack to set a new record. Record Setter founder and Senior Adjudicator, Corey Henderson, travelled to Sydney to Moonhack Mission Control to verify the record, and we were thrilled to hear that we came close to tripling the number of kids who took part last year!

The founder of Code Club Bangladesh, Shajahan Miah, summed up the spirit of Moonhack well: “Moonhack was a great opportunity for children in Bangladesh to take part in a global event. It connected the children with like-minded people across the world, and this motivated them to want to continue learning coding and programming. They really enjoyed the challenge!”

Code Club Australia’s General Manager (formal) Kelly Talagan explained, “Moonhack promotes that coding is a part of society. The invisible skill of computer problem-solving skills, expressing creatively and encoring social and academic development for future jobs. We’re also seeing a lot of young girls saying, “I’m awesome at this” and “I want to be a part of this industry.” Films like Hidden Figures really inspire and encourage girls to be a part of history.”

Code Club Bangladesh’s Project Manager Mehnaz Sharmin Mohona was delighted with the response and said “Our students were really excited to be involved in this year’s Moonhack and breaking a world record. It was amazing for them to see so many children like themselves from all over the world taking part. They have not stopped talking about their fantastic achievement and we can see a great improvement in their confidence too.”

On 20th July 2018, kids all over the world participated in Moonhack, a space-themed event to get kids coding.  Moonhack 2018 commemorated the 49 years celebration of Apollo 11 Moon Landing!

Code Club Australia who lead the event, confirmed that a new world record was confirmed – 35, 865 kids from over 57 countries submitted their coding projects!

Moonhack was also an opportunity to talk informally with kids about how code helped get Apollo 11 to the moon back in 1969 and what code was like back then.

Code Club Bangladesh’s project manager, Mehnaz Sharmin Mohona, spoke about the excitement around this year’s event: “It was really amazing this year. We are delighted that almost five hundreds young people took part in 2018. We completed eight Moonhack sessions in different schools during a full day of activities. The students were really happy to participate and enjoyed being part of a world record breaking initiative. It was great to see them smiling and their  joy and happiness were beyond describable.”

Code Club Bangladesh student Shuchi, aged 15, said, “I’m very happy that I was able to participate in this world record event, and thanks to Code Club Australia for arranging this event for past few years.”

Another Student of Code Club Bangladesh Nayan, aged 16, said, “It was really amazing and through coding my lunar module was able to land on the moon! I am already eagerly waiting for next year!”

Eight year-old Karima, who was one of the youngest to take part in Bangladesh said: “I think setting a new world record is really great! I’m a girl who enjoys coding and the Moonhack event is always an exciting news for me!”